A Weekend to Remember

MVP Brought the Car Chase Briscoe is Driving During the NASCAR Cup Series to Mitchell, Indiana, for the Persimmon Festival’s 75th Anniversary Celebrations 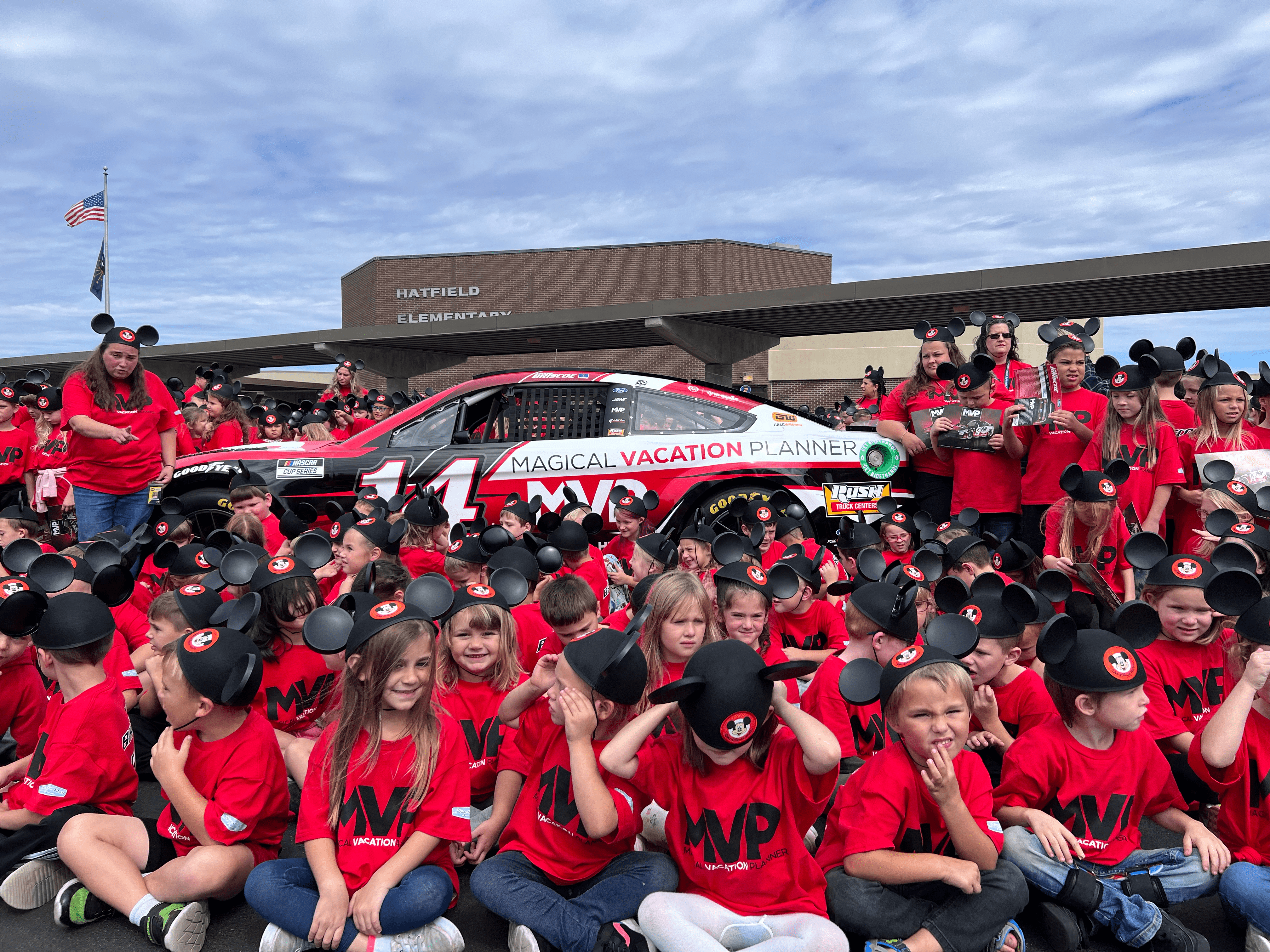 It was certainly a weekend to remember in Mitchell, Indiana, where Magical Vacation Planner brought the car Chase Briscoe is driving during the NASCAR Cup Series to support “Chase Briscoe Week” at Hatfield Elementary School, while also adding something special and unique to this year’s celebrations for the Persimmon Festival’s 75th Anniversary.

The magic started on Friday, September 23rd when the Magical Vacation Planner Ford Mustang that Briscoe has been driving during the NASCAR Cup Series Playoffs appeared in the front yard at Hatfield Elementary School to greet more than 700 children. Jamie Ane Eubanks, Magical Vacation Planner’s CEO & Founder, and her husband JJ Eubanks, MVP’s Executive VP of Sales & Marketing, joined teachers and staff at the school where Briscoe spent his childhood and where his mother still teaches, to give children the unique opportunity of experiencing a NASCAR car up close and personal.

“To have Chase’s car here was like having a piece of him with us,” said Steve Grissom, the principal at Hatfield Elementary School. And you could see the meaning of that statement in the children’s faces.

“Chase’s tenacity and work ethic are what he demonstrates as a role model to these kids. He’s extremely humble so he’ll never tell you this, but I don’t think he fully comprehends how big of a role model he really is to the youth. Just like Tony Stewart was to him. Chase is that guy now,” said Grissom. “And Jamie is the same way in her industry. I think the role model aspect is astronomical when looking at both of these individuals.”

Later that day, the community in Mitchell got to see the MVP car at the town’s post office as well. People got a chance to get close to the car and hear it rumble, a once-in-a-lifetime opportunity for many.

But the main event at the Persimmon Festival, year after year, is its weekend parade. And it was at this parade where part of Magical Vacation Planner’s staff and travel advisors walked behind the car to greet the entire Mitchell community, as they got the opportunity to take pictures and continue to show their support for Chase Briscoe and Magical Vacation Planner’s partnership.

“Being able to help contribute by bringing this excitement to the community around celebrating Chase and his success is very special for MVP and for me personally,” said Jamie Ane Eubanks. “Mitchell is such a special community of people, and I learned so much growing up there. It’s great to help bring something unique to the festival, and we hope it created some lasting memories for the community.”

It was the perfect ending to a magical weekend, in the hopes that the magic carries onto next weekend’s race as Briscoe drives the Magical Vacation Planner Ford Mustang, in an effort to make it through the second round of the NASCAR Cup Series Playoffs.

Magical Vacation Planner (MVP) was founded as a storefront travel agency in 2006. Today, MVP is a powerhouse company that provides one of the best vacation planning services in the industry through its team of independent contractors. An Authorized Disney Vacation Planner, MVP operates through three branches: MVP Parks, MVP Cruising, and MVP Getaways. MVP thrives to provide an exclusive and magical, stress-free vacation planning service at no additional expense to its clients over the price of the vacation package. The company aspires to become a household name in the world of travel through perseverance, innovation, and integrity, to continue to impact people’s lives for years to come.

In May 2022, Magical Vacation Planner announced its partnership with Stewart-Haas Racing in support of NASCAR’s rising star and long-time friend Chase Briscoe. MVP became the No. 14’s main sponsor for five NASCAR Cup Series Races and an associate partner at all other races for the season.